BOSTON (AP) — Worknesh Degefa had never set foot on the Boston Marathon course before she toed the start line in Hopkinton, Massachusetts on Monday morning. 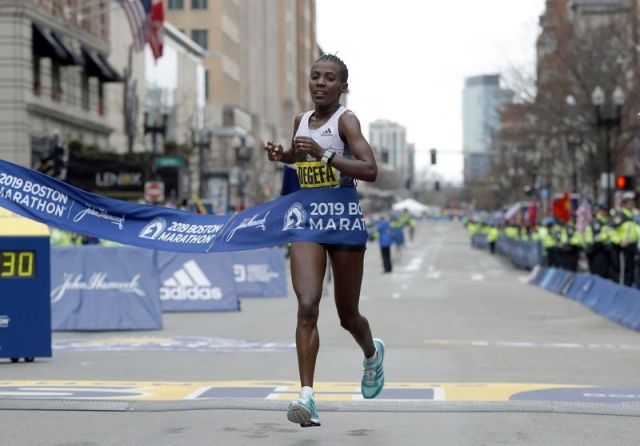 It didn’t stop the 28-year-old Ethiopian from conquering it on her first trip down the famed route.

Degefa broke away from the rest of the field early and ran alone for the last 20 miles to win the women’s Boston Marathon.

Degefa crossed the finish line in Boston’s Back Bay in a time of 2 hours, 23 minutes, 31 seconds.

She is the eighth Ethiopian woman to win the race, and the third in seven years. Kenya’s Edna Kiplagat was second, coming in at 2:24:13. American Jordan Hasay was third, crossing the line in 2:25:20. Defending champion Des Linden, who represented the United States in the marathon at the past two Summer Olympics, finished fifth in 2:27:00.

“Winning the Boston Marathon is super special to me,” Degefa said. “Even though I’d never seen the course before, last year I watched all the marathon coverage. I kept that in my mind.”

And for most of the race she kept the rest of the field far behind her.

It was Degefa’s first major marathon victory. She won the Dubai Marathon in 2017, setting an Ethiopian national record.

Linden took advantage of a rainy and windy course with temperatures in the 30s to claim last year’s title in the slowest time for a women’s winner in Boston since 1978.

A heavy band of rain moved through Hopkinton at the start line about 6:30 a.m. but tapered to a drizzle and then stopped before the women’s race began. It didn’t rain during the race, allowing the Ethiopian and Kenyan contingents to push the pace.

A half marathon specialist, Degefa took her first lead after Mile 4 headed into Framingham, followed by Ethiopia’s Mare Dibaba and Kenya’s Sharon Cherop. Degefa increased the margin between Mile 5 and 6 and opened a 20-second advantage by Mile 7.

“I knew that I had some speed, so I pushed myself after Mile 5,” Degefa said.

Degefa’s pace slowed in the final three miles and she looked behind her a few times to try to glimpse one of her fellow competitors.

Kiplagat became visible again in the distance around Mile 25, but there was no time for her to close the sizeable gap.

Despite not being able to get on the podium for a second straight year, Linden had a lot of support on the course. The crowd serenaded her with loud cheers when she was introduced. At the finish, a young girl held a sign that read “Des 4 Prez.”

On a day in which the marathon fell on April 15 for the first time since the April 15, 2013 bombings, Linden said it had lots of significance for the city and for herself.

“That run down Boylston was very special to me,” Linden said. “I feel like I’ve built a name for myself in this community with these fans and they really appreciate what I’ve done over the years.

“It’s also a sign that I’m pretty old that they actually know me now.”

Is the TPLF Unintentionally Preparing the Ground for a Military Takeover?

The TPLF will not shy away to destroy entire villages – GK

Ethiopia: Let Teddy Play On and On and On…By Alemayehu G. Mariam

Subjecting Gondar to a Cycle of Assault is Tantamount to Dismantling…

Petition calling for resignation of WHO Director-General nears 760k signatures

Abay Tsehay, One of the Top TPLF Men, Said: “Nothing Will…

Haile Gebrselassie: From athletics to the boardroom

Who are Members of the Election Board that Perform the ruling…

ABOUT US
Ethiopian Registrar is an extensive Ethiopian news source. It contains political and cultural news, as well as country profiles and updated regularly. Please Visit us every time, we hope you enjoy it and welcome any feedback. Please send any comments and questions to us at [email protected]
Contact us: [email protected]
© Copyright © 2020 Ethiopian Registrar News/Breaking News: All Rights Reserved